Thoughts on VR and Education.

By Andrew Wheelock - March 15, 2017
Over the past 10 years plus I have been very keenly following Virtual Environments, Gaming, and Education.   (My work in OpenSim can be found HERE)  One of the individuals that inspired me from the beginning of my education/gaming awakenings, was Philip Rosedale, the Founder of Second Life.  An early video of him explaining Second Life can be found below.  (Rosedale would leave his brain child Linden Labs aka Second Life a few years later)

What spurred my curiosity the most was the possibility of letting students create within a virtual world simulation.  Letting them explore certainly can have huge learning potential, but to me, giving students creation tools within a virtual world is where the real rubber hits the road, educationally speaking.
So as an educator when I started seeing the VR technologies bubble to the surface of common use technologies, I was certainly excited and intrigued.  And when I got my first, second, and most recent look at Occulus Rift... I was blown away by the realism and immersion of this technology.  My breakdown of VR can be found HERE.  One of my concerns though was that VR wasn't allowing for creation.  It was going to be a visual experience as it was being rolled out in early stages.  A good example of this is Google Expeditions.  I am a big fan of Google Expeditions, but it doesn't allow for the end user to interact with the environment let alone create.

However, I have recently discovered two VR platforms that are looking to jump into the immersion experience and allow for creation and collaborative creation.

Which brings me back to Philip Rosedale.  The current CEO of Linden Labs-  Second Life Ebbe Altburg is about to release its next stage of Virtual Reality: Project Sansar.  What I like about this virtual reality project is the ability to create.  Check out their promotional video below.

Interestingly, one other competing programs is called High Fidelity.  Guess who the driving force behind this platform is?  Philip Rosedale.  Here is a peek of High Fidelity below.

I'm really excited about the future of VR and especially the possibilities of creating.  Its a way off I think, but I am excited!   Thanks to Philip Rosedale, Ebbe Altberg, Snowcrash, and Ready Player One  for inspiration.

Popular posts from this blog

WHAT   The Coffee with a Geek Black Mirror Discussions WHEN :  August 22nd, 2018 WHERE :  YouTube Live Hangout TIME:   3:30-4pm Eastern Please join the Black Mirror Support Group panel for our 2nd installment.  For this, session we will be exploring the episode entitled, "Shut Up and Dance".  If you're not familiar with Black Mirror, it is a Netflix Series that is explores technology trends and how they impact society.  Each episode is standalone, so you don't need to watch them in any particular order.   Join my colleagues, (Jennifer Murphy, Heather Krieger, and Matthew Mariglia as we take a deep dive into this episode and how it relates to education. For the Show Notes Click HERE
Read more

iTunes Podcast Link HERE I've always said that in times of trouble or strife, seek comfort and inspiration in the arts!  I thought it would be a great time to chat with Artist Fiona Fei.  Fiona does most of her work in the virtual world program Second Life.  For educators, Second Life is a free virtual world program that is really designed for adults.  Within this platform are various educational groups and really creative spaces.  One area that I have seen a lot of growth in Second Life is the area of arts.  There are many artistic exhibits that are free to explore and usually meet the artists.  One of the great things about these exhibits is that they are immersive and organic.  I really think that K12 education could use virtual environments  to let their students create. A little about Fiona in her own words:  I am classically trained in oil painting and electronic media. Much of my early years were spent painting landscapes and portraits using oil paint on canvas. Ho
Read more 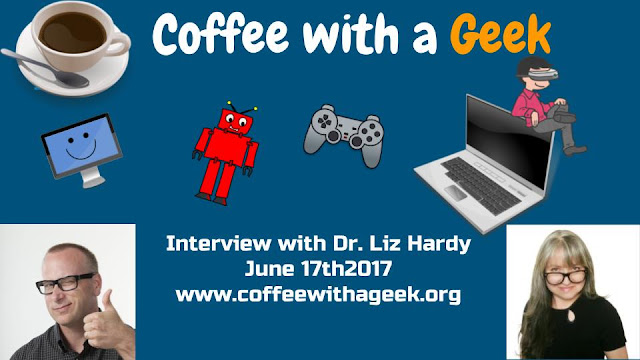 Over the past few years my work has led me to explore the potential and pitfalls of Online Learning.  It is a very new and trending industry and examples of both good, bad, and ugly abound.  As a matter of fact, I found lots of the E-Learning/ Online Learning Courses that I came across that were very dry and dull.  In essence, lecture style teachers were simply bringing their lecture style into an online platform.   While some teachers are certainly brilliant orators, I found that this was limiting the power of e-learning technologies. So in my research, I came across the work of Dr. Liz Hardy.  Liz's work has been laser focused on making Online Learning, engaging and powerful.  Liz is in New Zealand, so our time zones were difficult to schedule an interview, so she kindly answered my questions via Google Docs.  Here are her insights into the future and possibility of Online Learning and education. Bio:   Dr. Liz Hardy is the founder of SimpliTeach.com, which shows online
Read more